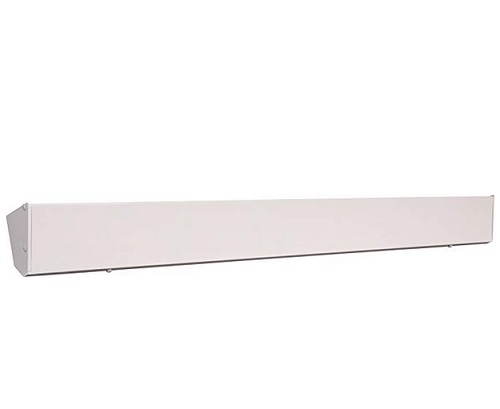 Cove heating works by generating heat sources for each area and room. It radiates heat to make the room warmer by installing the unit right under the ceiling. You can also check the Marley Cove Heater for another reference for the cove heater.

Other than that, the cove heater allows homeowners and household members to use space in the house unrestrictedly.

As we have mentioned earlier, efficiency might be one of several things that become the forte of the electric heating units. Qmark RCC Cove Heater is just one of them that could take full advantage of the efficiency itself.

Technically, the unit is installed below the ceiling so it could spread the heat across the room evenly. To regulate the heater, you can use a thermostat. The good news is that it can be independently regulated per room.

Qmark Radiant Cove Heater is one of the best ones on the market because it gives warmth to the whole room, inanimate objects may absorb the warmth and reserve it for a while. It makes the room appears warmer even if you turn off the heater.

Talking about the design, Qmark Electric Cove Heater is made of an aluminum panel coated with an exclusive vitreous enamel. The panel will radiate the heat into the room as its main task. It works similarly to solar panel energy.

And this is why the heat feels pretty comfortable at so many levels. No matter which Qmark type RCC cove heater you choose, the heat energy is directed just like how you adjust your air conditioner.

The good thing about this machine is that the heat feels warmer and nice just like how you feel under the sun in the morning. In return, the radiant heat makes warm all day long.

However, you cannot skip the insulation. The machine works properly if you install a proper insulation system in your house in the first place. The warmth will not stay in your house unless the house is insulated.

More than anything, we highly recommend QMark cove heaters for radiant heat in your home.